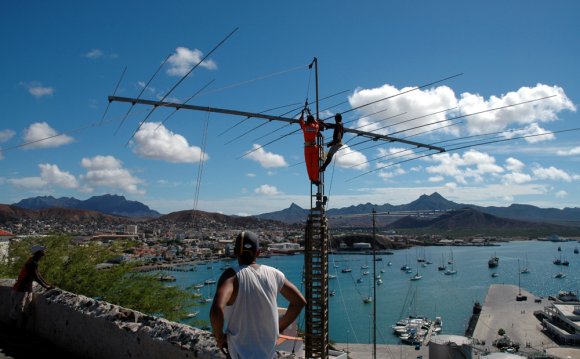 Friday the 13th turned out to be a lucky day for Colorado hams, as Gov John Hickenlooper signed into law an Amateur Radio antenna bill that mirrors the PRB-1 federal pre-emption policy. The Colorado General Assembly, without amendment, passed Senate Bill 15-041, sponsored by Sen Chris Holbert and Rep Kevin Van Winkle. The new legislation, introduced in early January, specifies that no local government “shall enact or enforce an ordinance or resolution regulating Amateur Radio antennas that fails to conform” with PRB-1’s “reasonable accommodation” provisions.

“There was absolutely no opposition from anyone at any time for this bill, ” ARRL Colorado Section Manager Jack Ciaccia, WM0G, enthused. “This was truly a bi-partisan bill, and we had terrific support from both sides of the aisle in both chambers. For junior House member Kevin Van Winkle, this was his first bill ever presented, supported, and passed. He was thrilled to get his first bill signing pen.”

The three-part PRB-1 federal policy states that local regulation of Amateur Radio antenna installations be based on health, safety, or aesthetic considerations; be crafted to reasonably accommodate Amateur Radio communications, and represent the minimum practicable regulation to accomplish the legitimate purpose of the local government.

Ciaccia said that the testimony of Colorado State Government Liaison Robert Wareham, N0ESQ, offered “an excellent opportunity to sell Amateur Radio and ARES” to the lawmakers.

“[T]he politicians had lots of glowing remarks, because Colorado hams have been very much involved with emergency communications in many of their communities for many years now, during just about every wildfire, ” Ciaccia said. He pointed out that hams had also impressed Colorado’s lawmakers by providing emergency communication during the 2013 flood evacuations in isolated areas.

Following the bill signing, Ciaccia recounted, Gov Hickenlooper took another 15 minutes out of a busy day to meet with the ham contingent on hand and to personally thank the Amateur Radio community for all that it does.

Wareham aided in getting the legislation drafted and introduced by Sen Holbert and Rep Van Winkle, and he also testified on behalf of the measure while it was being heard in committee. ARRL General Counsel Chris Imlay, W3KD, provided legal expertise and case precedents and consulted directly with Wareham, also an attorney, as the bill made its way through the General Assembly.

Amateur Radio Antenna Tuners - What Are They Really Worth.wmv