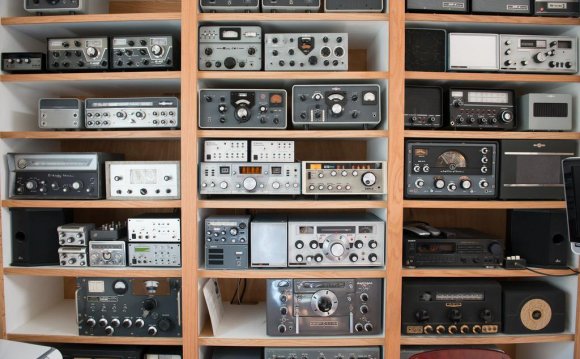 Radio captured the imagination of thousands of ordinary persons who wanted to experiment with this amazing new technology. Until late 1912 there was no licencing or regulation of radio transmitters in the United States, so amateurs - known informally as "hams" - were free to set up stations wherever they wished. But with the adoption of licencing, amateur operators faced a crisis, as most were now restricted to transmitting on a wavelength of 200 meters (1500 kilohertz), which had a limited sending range. They successfully organized to overcome this limitation, only to face a second hurdle in April, 1917, when the U.S. government shut down all amateur stations, as the country entered World War One. - - - - - - - - -
EARLY EXPERIMENTERS
Beginning in the late 1880s, Heinrich Hertz conducted a series of experiments in Germany which proved the existence of radio waves. Moreover, the devices used in early radio demonstrations could readily be constructed by self-trained individuals - in the July 6, 1894 The Electrician (London), Oliver Lodge, reviewing "The Work of Hertz", noted that "Many of the experiments lend themselves to easy repetition, since they require nothing novel in the way of apparatus except what is easily constructed; many of them can be performed with the ordinary stock apparatus of an amateur's laboratory." A few months later, 21-year-old Guglielmo Marconi began his historic experiments on his father's Italian estate.

Prior to late 1912, there were no laws or regulations restricting amateur radio transmitters in the United States. The industrialized northeast quickly became congested with a mixture of competing amateur and commercial stations, and it was the amateur operators who sometimes dominated the airwaves, as recounted in Irving Vermilya's Amateur Number One, from the February and March, 1917 issues of QST magazine. (Vermilya came from the ranks of a group which provided a number of the earliest radio enthusiasts - amateurs operating private telegraph lines, who wanted to expand their range without the bother of having to ask the "Mr. Taylors" of the world for permission to string their wires. Amateur Telegraphers, from the August 6, 1892 Electrical Review, reviewed a plan in Cranford, New Jersey to interconnect 30 locations by telegraph lines.) Many amateurs quickly gained professional positions, and, in the fall of 1924, a four-part Radio Age magazine series, Reminiscences of an Old Operator, reviewed Arthur Leech's early experimentation as an amateur, followed by his work as a shipboard operator, starting in 1909 at the age of 15. Although most amateur enthusiasts were male, in 1911 a young woman, who worked as a landline telegrapher but hoped to someday become a shipboard radio operator, joined the New York City-area airwaves. Her personal review of early radio, The Autobiography of a Girl Amateur, appeared anonymously in the March, 1920 Radio Amateur News. The Feminine Wireless Amateur, from the October, 1916 The Electrical Experimenter reviewed female amateur and professional radio operators.

It was difficult at first for amateur experimenters to find technical information about radio. In Hertzian Waves, the November, 1901 issue of a mechanical and electrical hobbyist magazine, Amateur Work, included construction information for a simple transmitter and receiver, similar to what Heinrich Hertz had used. Another early resource was How to Construct An Efficient Wireless Telegraph Apparatus at Small Cost, by A. Frederick Collins, from the February 15, 1902 Scientific American Supplement - in 1917, Donald McNicol reported that within the United States "this article did more to introduce the art of amateur radio than anything else that had appeared". Many early amateurs were young, and most built their own spark-transmitters and receivers. In Amateur Work's June, 1904 issue, "Wireless" Telegraph Plant By Amateur Work Readers showcased the efforts of two Boston, Massachusetts 8th graders, who had built a set capable of covering eight miles (12.8 kilometers). And the September, 1906 Technical World Magazine included an article by M. W. Hall, Wireless Station in Henhouse, which featured the activities of two Rhode Island teenagers. Over time radio technology became more refined, and an eight-part series beginning in the September, 1916 Popular Science Monthly, How to Become a Wireless Operator by T. M. Lewis, provided detailed plans for constructing a tuned spark transmitter and crystal detector receiver.


HUGO GERNSBACK
One of the first companies to sell affordable radio equipment to experimenters and amateurs was the Electro Importing Company of New York City, set up in 1904 by Hugo Gernsback, an 18-year-old immigrant from Luxembourg. Beginning in 1905, this company sold what may have been the first complete radio system - including both a simple transmitter and receiver - offered to hobbyists on a national scale, under the name of Telimco Wireless Telegraph Outfits. The first national advertisement for Telimco outfits - possibly the first-ever advertisement by a company offering an inexpensive complete radio system to non-professionals - appeared in the November 25, 1905 issue of Scientific American. The Electro Importing offerings were later expanded, and in a 1910 catalog, which featured "Everything for the Experimenter", the company claimed it was "the largest makers of experimental Wireless Material in the world". The basic Telimco systems, plus other radio transmitting and receiving equipment, are included in a 1910 extract from Electro Importing Company: Catalogue No. 7.

Hugo Gernsback would continue to be one of amateur radio's strongest proponents during its first years. In addition to the radio equipment sold through his Electro Importing Company, Gernsback started three magazines with large amateur followings - Modern Electrics in 1908, The Electrical Experimenter in 1913, and Radio Amateur News in 1919. He also claimed credit for coming up with the idea of assigning amateurs to 200 meters, dating to an Editorial which appeared in the February, 1912 issue of Modern Electrics. Gernsback's other accomplishments were recounted in a rousing review which closes with "Long live the Wireless! Long live the Amateur!!": Wireless and the Amateur: A Retrospect, from the February, 1913 Modern Electrics. And the 1914 Electro Importing catalog included A Sermon To Parents, written by Gernsback, which predicted that "Electricity and Wireless are the coming...