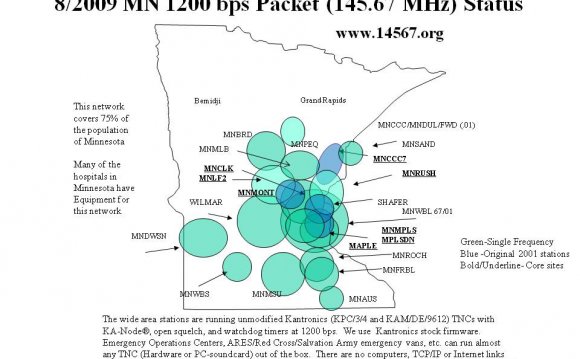 It was in March, 1980, that the Federal Communications Commission approved the transmission of ASCII for Amateur Radio in the United States. That was a year and a half after Canadian hams had been authorized to transmit digital "packet radio", and the Canadians had already been working on a protocol for it. Doug Lockhart, VE7APU, of Vancouver, British Columbia, had developed a device that he called a terminal node controller (TNC). It worked with a modem to convert ASCII to modulated tones and convert the demodulated tones back to ASCII. Doug had also formed the Vancouver Amateur Digital Communications Group (VADCG) and named his TNC the "VADCG board".

Hams here in the U.S. started experimenting with the VADCG board, but in December, 1980, a ham from the San Francisco Bay Area, Hank Magnuski, KA6M, put a digital repeater on 2 meters using a TNC that he had developed. A group of hams interested in Hank's TNC started working together on further developments in packet radio and formed the Pacific Packet Radio Society (PPRS). AMRAD, the Amateur Radio Research and Development Corporation, in Washington, DC became the center for packet work on the east coast, and in 1981 a group of hams in Tucson, Arizona, founded the Tucson Amateur Packet Radio Corporation (TAPR).

Working together these groups developed a modified version of the commercial X.25 protocol called Amateur X.25 (AX.25) and in November, 1983, TAPR released the first TNC in kit form, the TAPR TNC1. In 1984, a great deal of packet experimentation was done, software for packet bulletin board systems was developed, and packet radio started becoming more and more popular all across the U.S. and Canada.

Packet Radio was one of the major developments to hit the world of Amateur Radio and thousands of hams soon caught the "packet bug". If you're wondering what it's all about and why so many people got so excited about it, continue reading. You're about to find out.

Packet Radio - What It's All About

Packet seems to offer something different from other facets of Amateur Radio, yet it can be used for everything from a local QSO to a DX contact thousands of miles away, for electronic mail, message transmission, emergency communications, or just plain tinkering in the world of digital communications. It presents a new challenge for those tired of the QRM on the low bands, a new mode for those already on FM, and a better, faster means of message handling for those on RTTY. Packet is for the rag chewer, the traffic handler, the experimenter, and the casual operator.

A ham can get involved very easily with relatively small out-of-pocket expenses. All you need is a transceiver, a computer, and a TNC or special packet modem and software. A two-meter rig is preferred, since that's where most of the packet activity is located. You probably already have the rig and the computer, so all you need to buy is the TNC, which costs just over $100, or the special modem and software, which sell together for about $50.

The TNC, the Terminal Node Controller, is a "little black box" that's wired between the computer and the radio. It contains software for controlling the outgoing and incoming transmissions for your station and a modem that converts the data from the computer into AFSK tones for transmission and changes the tones that are received by the radio into data for the computer. The TNC modem works much like a modem that's used to connect your computer to the telephone lines. It's a simple matter of wiring up a plug and a couple of jacks to become fully operational on packet. If you prefer to use the small modem instead of a TNC, you'll need special software for your computer to replace the software in the TNC. Either method works equally well.

Packet is communications between people either direct or indirect. You can work "keyboard to keyboard" or use electronic mailboxes or bulletin board systems to leave messages. Due to the error checking by the TNC, all of it is error free, too. (That is, as error free as the person at the keyboard types it!) As the data is received it's continuously checked for errors, and it isn't accepted unless it's correct. You don't miss the information if it has errors, however, because the information is resent until it is correctly received.

Fun with amateur radio 15 Setting up your packet radio ...