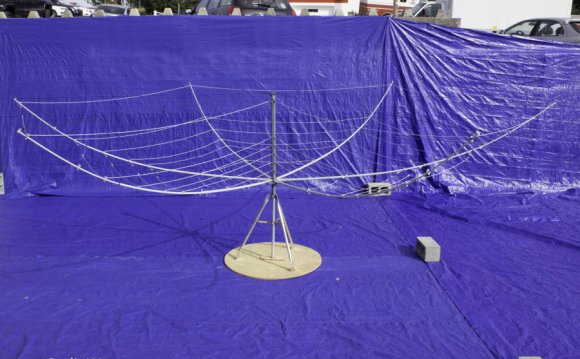 
The $4 Special Antenna
by Joe Tyburczy, W1GFH
(Used with his kind permission)

Sure, you can find "all-band wire antennas" for sale in the back pages of Ham magazines costing $150 or more. But beware: Marconi spins in his grave every time a ham buys an aerial instead of building it. The plain and simple truth is that wire antennas for the HF bands were intended to be hand-made and not store-bought.

Untold generations of intrepid Radio Hams have fashioned their own equipment out of spit and bailing wire. Do you think the spark-gap dudes of the 1920's just went out and bought ready-built G5RV's from HRO or AES? No way! They slapped together aerials out of bedsprings, chewing gum, and frozen cow poop. For them, every day was Field Day. I think that home-built antennas should be awarded 10 db of "honorary gain" simply by virtue of their ingenuity.

And in this world of microprocessor controlled micro-rigs, constructing one may be your only chance to build something and actually see it work on the air. Think about it.

RadioWorks, Alpha-Delta, MFJ, B&W, Van Gordon, W9INN, and W7FG...nothing wrong with the wire antennas they sell. But buying one is no substitute for "rolling your own". Don't be overawed by their advertising rhetoric. You can make an antenna every bit as good as theirs, and even better in many cases.


Don't be intimidated by SWR, either. Your rig will not blow up and kill you. Most modern rigs will politely refuse to transmit into a really bad match. A perfect 1:1 SWR is for sissies, anyway. All *real* hams have conducted perfectly good QSO's at 3:1 (or more) at some time or another.

You may be surprised to know that the vast majority of hams didn't fret about SWR until after WWII when coax cable and SWR meters ("SWR Bridges" as they were first known) became available on the commercial market. Before that time, you simply cut your antenna to frequency, loaded the transmitter final for best output according to the plate current meter, and that was that.

I am a big fan of "balanced line" (twinlead, open wire line, etc.) vs. coax. By using balanced line and a tuner you can have one, single-element antenna that works well on all bands. You can't do that as easily with coax. The basic "W1GFH $4 SPECIAL" shown below is a variation on the type of versatile skyhook I've been using for years.

Now at this point, some of you may be looking at the diagram and muttering, "Jeez Joe, that's just a dipole fed with twinlead and used with a tuner". Well of course it is. Virtually all antennas are "di-poles" (i.e. "two sides") in some form or another. This one just happens to be made from low-cost materials.

I won't go into the theory here, but trust me: balanced feedline, properly used, does not "leak" RF and is less lossy than coax. I've tried the commercial 450-ohm ladder line, but prefer 300-ohm TV twinlead, and the cheaper the better. Radio Shack TV twinlead is ideal. Home Depot has some good stuff, too. Forget all the obsessive junk about standing waves, impedance and velocity factor. What you really need to concentrate on is getting an interesting set of antenna insulators.