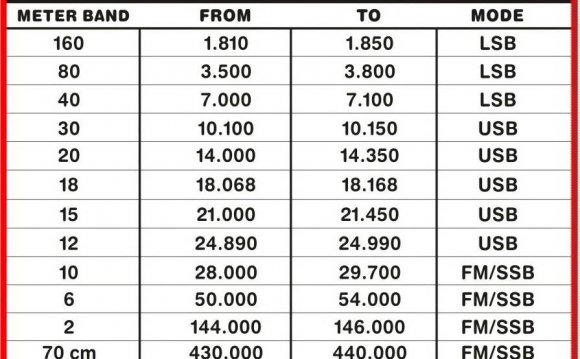 Most "shortwave" radios sold today actually tune a much broader frequency range that includes the AM broadcast band and parts of the longwave spectrum. A typical tuning range is from about 150 kHz to 30 MHz.

By international agreement, the radio spectrum has been divided up among various users. While there are some exceptions, most nations and the stations they authorize do follow the allocations described below:

150 kHz and below: Signals on these frequencies cannot propagate well via the ionosphere, but are able to penetrate ocean water well. As a result, several military stations used for submarine communications are found here. Most transmissions are in CW and RTTY. You need a really large antenna to hear much here, and in most locations electrical noise and static will be too high.

150 to 540 kHz: This is what most SWLs mean by "longwave." Most stations heard in this range are navigation beacons that continuously repeat their call signs in Morse code. There is a also a broadcasting band in Europe from 155 to 281 kHz. Some RTTY signals are found in the upper end of this band. Marine weather and safety broadcasts, known as NAVTEX, are transmitted on 512 kHz. Your best reception here will be at night, especially during the fall and winter months.

1700 to 1800 kHz: This is a "grab bag" of miscellaneous radio communications, mainly beacons and navigation aids. You may hear several transmitters that sound like chirping crickets; these are floating beacons used to mark fishing and offshore oil exploration locations.

1800 to 2000 kHz: This is the 160-meter ham radio band. Most voice communications will be in LSB, with best reception at night during the fall and winter months.

2000 to 2300 kHz: This range is used maritime communications, with 2182 kHz reserved for distress messages and calling. There are also several regularly scheduled maritime weather broadcasts buy U.S. Coast Guard stations. Most activity will be in USB, and best reception is at night.

2300 to 2498 kHz: This is the 120-meter broadcasting band, mainly used by stations located in the tropics. However, the FCC has allowed WWCR in Nashville, Tennessee to broadcast here and others may follow.

2498 to 2850 kHz: More maritime stations are found here, as well as standard time and frequency stations WWV and WWVH on 2500 kHz.

2850 to 3150 kHz: This band is used mainly by aeronautical stations in USB. Several stations broadcasting aeronautical weather bulletins, and you can also hear traffic between airports and airplanes aloft.

3150 to 3200 kHz: This range is allocated to fixed stations, with most communications in RTTY.

3200 to 3400 kHz: This is a very interesting segment. This us the 90-meter broadcasting band, used mainly by stations in the tropics. Canadian standard time and frequency station CHU can be heard on 3330 kHz. Several fixed stations also use this range, including several associated with various agencies of the U.S. government. Best reception will be at night.

3400 to 3500 kHz: This range is used for aeronautical communications in USB.

4000 to 4063 kHz: This is a fixed station band, mainly used by military forces for SSB traffic.

4995 to 5005 kHz: This range is allocated internationally to standard time and frequency stations. In North America, youll mainly hear WWV and WWVH on 5000 kHz.

5005 to 5450 kHz: This range is a real jumble! Several broadcasting stations are found in the lower part of the segment, and fixed and mobile stations in SSB, RTTY, and CW are found throughout this band. Best reception is during the evening and night hours.

5450 to 5730 kHz: This is another band for aeronautical communications in USB.

5730 to 5950 kHz: Another jumble of different stations! For years, this band has been used by fixed stations of the U.S. government for communications in USB and RTTY. However, several broadcasters are also showing up here.

5950 to 6200 kHz: This is the 49-meter broadcasting band, and is loaded with signals from late afternoon to a couple of hours after your local sunrise.

6200 to 6525 kHz: This is a very busy band for maritime communication in USB and various FSK modes like AMTOR and FEC.

6525 to 6765 kHz: This is another busy band, this time for aeronautical communications in USB. Best reception is during the evening and night hours.

6765 to 7000 kHz: This segment is allocated to fixed stations, with signals in SSB, CW, FAX modes, and miscellaneous digital modes.

7300 to 8195 kHz: This segment is mainly used by fixed stations, such as Canadian standard time and frequency station CHU on 7335 7850 kHz, although several broadcasters can be found in the lower reaches. Various FSK (RTTY) and digital modes are used.

8195 to 8815 kHz: This is a busy maritime band from the late afternoon until early morning, with most traffic in USB and FSK modes.

8815 to 9040 kHz: This is another aeronautical communications band, with traffic in USB. Several stations hear broadcast aeronautical weather reports.

9040 to 9500 kHz: This range is used mainly by fixed station in various FSK and digital modes, but it is also used by several international broadcasters.

9500 to 9900 kHz: This is the 31-meter international broadcasting band, and is packed with stations from around the world. Best reception is usually from mid-afternoon to around mid-morning, although some stations can be heard here throughout the day, especially in winter.

How to Use a Ham Radio : How to Demonstrate Ham Radio Bands