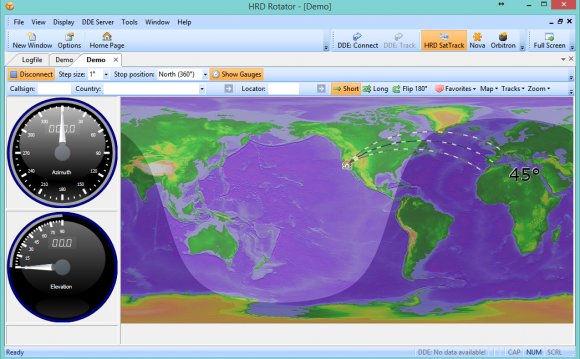 Ham Radio Deluxe is an application designed to offer you everything you need in order to get the most out of your radio directly from your computer.

It comes as a software collection brought together under a single graphic user interface which offers you Rig Control, Logbook, Digital Modes, Rotor Control and Satellite tracking features. The application supports a very large number of radio models from manufacturers such as Yaesu, Icom, Kenwood, Ten Tec, Elecraft and others.

Ham Radio Deluxe enables you to connect to the radio device via cable and control it from your computer. The entire setup process takes you just a couple of minutes, time needed to choose the manufacturing company, radio model, COM port and speed. The application is capable of storing radio configurations into presets that you can use anytime you want.

Once the connection is established, Ham Radio Deluxe displays all the buttons and knobs of the radio in its main window. It’s not an accurate representation of the layout of the actual radio but it does offer all the existing functions that it has.

You can even use the application to control multiple radio devices that are connected to the same computer and easily adjust volume frequency and other settings with the use of your mouse.

Ham Radio Deluxe also allows you to switch to full screen mode when you just want to see the controls of the radio. Moreover, you are also given the possibility to customize the controls by adding or removing buttons from the main panel that. This way, it’s easier to focus on the functions you need, especially if you’re new to operating them.

In closing, with the above to consider and much more to discover, it’s safe to say that if you’re looking for an alternative and much easier way of controlling your amateur radio device, then you can certainly try Ham Radio Deluxe.