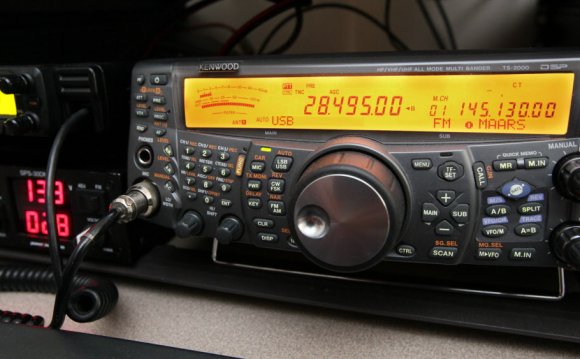 With a smartphone in every pocket, isn’t amateur radio a thing of the past?

The answer, as was clear at the Woodstock Rescue Squad Headquarters on a recent Saturday afternoon, is no, far from it.

“Year to year [the number of licenses issued is] increasing, which is not what most people would tend to expect, ” said Keith Tilley, certified instructor with the American Radio Relay League.

The occasion was a two-day licensing class organized by the 55-member-strong Overlook Mountain Amateur Radio Club, which was founded in the 1960s. Participants learned the basics, took a test and received their call signs a few days later.

Over 725, 000 Americans have ham radio licenses, up more than 60 percent since 1981, according to NPR. Perhaps part of the appeal is the charm of analog, which has made LPs the fastest growing music format in recent years not transmitted over a wire. Compared with the amount of incoming data on a web browser with several social networking and messaging apps running, ham radio is refreshingly focused. Another factor: preppers. Our increasing interconnectedness and diminished self-reliance have nurtured a certain strain of anxiety that can only be relieved by having all supplies on hand for a worst-case scenario— including communications.

But surely the single largest factor in the recent growth of ham radio was the FCC’s 2007 decision to do away with the Morse code requirement for all operators.

Tilley spoke about some of the club’s local coordinated activities.

“We did pumpkin patrol last night, ” said Tilley, speaking the day after Halloween. He said the patrol involves keeping watch to make sure hooligans don’t drop pumpkins off highway overpasses.

“We were there watching 10 or 11 different overpasses over the Thruway, ” he said.

“Most of what we do in terms of public service is Kingston Classic and other events that are big in areas that need radio communications. We provide public service that way and we also practice for the potential of disasters in the future.”

Amateur radio has stood the test of time as “being the mode of communication that works when everything else has failed, ” said Tilley, explaining an amateur radio station can be run with no electricity and no Internet. Recently amateur radio operators provided a vital service in Greene County in the aftermath of Hurricane Irene and Sandy when many towns lacked infrastructure for an extended time.

“You don’t realize how much your life depends upon that stuff ’til it’s gone, ” Tilley said.

The club teaches the first license class a couple times a year, usually in the fall and spring, but can also arrange to teach it to large groups or workplaces.

“The idea is to get more amateur radio operators to primarily get interested in the hobby to see what they want to pursue; whether they want to get involved in emergency communications, which is very popular these days, or because they want to get more into the technology and learn how things work, or just to have the fun of chatting with people, ” said Tilley.

The second and third licenses are more for worldwide communication and delve much deeper into the underlying technology.

In addition to getting first-timers prepared for their license exam, the club also helps people with the sometimes intimidating choice of radios.

“Based on a variety of things like your budget and what parts of the hobby you like, there’s some decisions to be made that can be kind of scary, ” said Tilley. “So we try to make it a little easier to choose the first radio and to decide where to start in what’s really a very wide-ranging hobby.

“Hopefully when folks leave here not only will they be legally able to use the equipment but they’ll have a pretty good idea where they want to start.”

The class and exam is $30 and a high-quality handheld radio can be had for under $50.

“That’s a fairly new development, ” said Tilley. “They used to be a lot more than that. A Chinese manufacturer has come on the scene and just blown everyone away. You can get a decent quality radio at a tenth of the price of what it used to be.”

While that little handheld only puts out five watts at most and has a range of 5-10 miles, repeaters are plentiful. Repeaters are electronic devices, often located on mountains or hilltops, which amplify weak radio signals. Find a repeater and suddenly that little handheld has a range of 50-60 miles, Tilley explained. In theory, that transmission can be relayed from repeater to repeater and across the country.

“A lot of people upgrade their equipment because they want some particular function, but the equipment never goes out of style, ” said Tilley. “Electrons are electrons.”

“A typical base station could probably run $1, 500. But you don’t need to start there and some people never get there. Some people get the handheld and maybe a mobile and they’re good.”

The Overlook Mountain Amateur Radio Club meets on the third Thursday of the month at 7 p.m. at the Ulster Fire/Rescue Training Center, 259 Ulster Landing Road, East Kingston. The American Radio Relay league website, arrl.org, provides a wealth of information including a comprehensive listing of clubs and classes throughout the country.

Only a fraction of the material published in each week's Saugerties Times makes it to our website. To read all about local government, schools, people of interest, arts and entertainment, classifieds and the region’s best calendar, subscribe today for just $30 a year.

What is Ham Radio