Where can I Buy a Ham Radio? 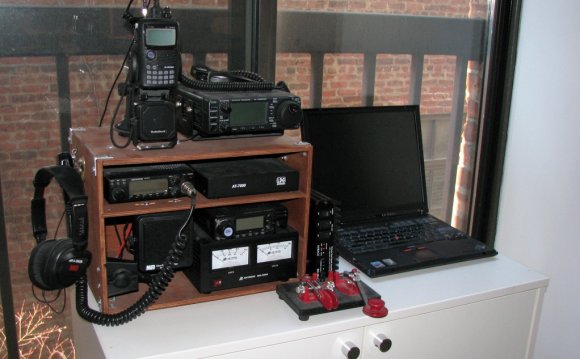 I’m often asked a simple question: how much does it cost to become a ham? The answer, of course, is “it depends.” But there’s a pretty basic path that most hams follow, so let’s take a look at it.

First, there’s the matter of getting the license in the first place. The ARRL study guide for the Technician License will set you back $29.95 + shipping + (if applicable) sales tax. The shipping is a rather whopping $10.50, so without tax that’s $40.45. Warning: The Technician question pool changed on July 1st, 2010, so make sure you have the most recent study guide! Borrowing an old one may steer you wrong! (You may be able to get the book more cheaply on Amazon, but be sure you’re buying the current edition.) The book comes with a CD with practice exams. You can learn all you need from the book, but I do recommend at least touching base with another ham while you’re studying. Hams who help others become hams are called “elmers.”

Okay, now you’ve got your license. What to do? The first thing you should do, and I recommend this so highly I consider it mandatory, is to join the ARRL. If for no other reason, their magazine, QST, is worth every penny. It comes monthly, is professionally put together, and is chock-full or articles aimed at you, the new ham. Further, membership enables you to explore the nethermost regions of the ARRL website, including its extensive list of product reviews. Membership is $39/year. Next, join your local ham radio club. If you’re in a metro area, you’ll have many to choose from. Here in sparsely-populated southwestern Colorado, it’s the Montrose Amateur Radio Club. Plan on paying about $20/year. Why do I consider this expense mandatory too? Because you’ll learn far more about ham radio from other hams than you ever will out of a book or magazine!

Ah, yes, the radio. After all, you went to all that effort so you could talk with people on the air. In almost all situations I recommend that the first radio be a 2-meter or a dual band (2-meter/70cm) handheld radio, usually called an “HT.” Where do you get this radio? Well, I often use Ham Radio Outlet. I find the folks on the phone to be courteous and patient and willing to answer your many questions. There are other large outfits you can order from, particularly Amateur Electronic Supply, but there are any number of places. I strongly recommend you get a fairly simple radio. At a minimum it should be 5 watts, have rechargeable batteries, a detachable antenna, and a way to run it from 12VDC. I do not recommend getting a radio with too many features—you’ll rarely use them and they’re expensive. I just purchased a nice, basic HT from an outfit called PowerWerx. They sell the inexpensive Wouxun KG-UV3D dual-band handheld that meets all the requirements for a first radio. See my review here, though I do warn you you’ll want to get the programming cable too. So, with the programming cable, the antenna adapter, and the radio, that’ll be about $160, shipping included. Any sales tax is additional.

You’ll accumulate accessories. You’ll soon want a magnetic-mount antenna for your vehicle, such as the MFJ-1402, $29.95 + S&H, and maybe you’ll want to participate in a ham club activity to build yourself a roof-mounted J-pole antenna. The parts will probably be about $15, but you also need coax cable to get from your radio to the antenna. A 25-foot cable with connectors already installed is the C&G HRO8X/25U, for $32.95 + S&H. (But beware—it’s further from your operating position to the roof than you might think!) Your handheld plus some accessories are great for casual home or mobile conversations.

We’re up to $215.45, and that’s without accessories. To give yourself some leeway, I’m going to say plan on $350, which gives you an accessories budget.

Many hams think the Technician level is just fine and have no desire to upgrade to General. If that’s you, you’re in good company. But you’ll accumulate radios. Probably your second radio will be a 2-meter or 2-meter / 70 cm “mobile” radio, so called because it fits into a car or truck well. But it also makes a great base station. You can use that same magnetic mount antenna on your car, and that same J-pole and coax. I have the inexpensive Yaesu FT-7800. It’s current incarnation is the Yaesu FT-7900, and it sells for $279.95 + S&H. Ah, but there’s a catch. Using a radio like this requires a 12-volt power supply. That’s a whole ‘nother story in itself, but plan on $100 to $150. Pay particular attention to how much noise the power supply fan makes. I have an MFJ-4225MV and have had to modify it because the fan is so noisy. Note: make sure you get a power supply capable of 20A or 25A continuous as you’ll undoubtedly want to use the same power supply with your HF radio after you upgrade to General. And BE SURE to get a power supply made for ham radio, as something you get at Radio Shack might generate terrible RF noise.

Okay, where are we:

Why, you might ask, do I recommend that for your first few radios you purchase new equipment? Because you know it’ll work and you have a warranty. There’s a lot of great used gear out there, but until you have some more experience, it’s hard to separate the wheat from the chaff. Stick with new for the first HT and the first mobile rig.

You can, of course, go on from there. You may want a fancier antenna. Or you’d like a speaker-mike to go with that handheld. And so on. At some point you’ll want to upgrade to General, which means privileges on HF, which takes a different radio. I’ve posted on HF radios from, and Kenwood, all of whom offer some great first HF radios (as well as second, third, fourth, etc.). And, of course, an HF antenna…. So, to answer the basic question, how much does ham radio cost? Answer: it costs as much as you want it to cost!

gold after america tour gold after five dresses gold after hours price gold against the soul gold against inflation gold against us dollar gold against inflation chart gold against loan gold against dollar gold against cash gold against the soul vinyl gold among us gold among us character gold among us pop it gold among the dross gold among the sand gold among us wallpaper gold among the dross meaning gold among us logo gold around america tour gold around pupil gold around the world gold around tooth gold around me gold around teeth gold around the american flag gold around iris gold as an investment gold as inflation hedge gold as a gas gold as a hedge against inflation gold as a conductor gold as an element gold as currency gold as an investment 2021 gold at the bottom of the ocean gold at the bottom of lake michigan gold at the bottom of the pyramid gold at the bottom of niagara falls goldfish at bottom of tank gold at bottom of world trade center gold at bottom of waterfall gold at bottom of american flag gold at the top of the pyramids gold brick top of moving stairs top golf what happened to the gold at the top of the pyramids what happened to the gold on top of the great pyramid gold at the end of the rainbow gold at room temperature gold at fort knox gold at spot gold at the end of the rainbow meaning gold at walmart gold at world trade center gold at higher levels 5e gold before and after etf gold before it is refined gold before processing gold before purification gold before election gold before you wake up gold before mining before gold coast what was the name of ghana gold behind the couch table gold behind currency gold behind waterfall rdr2 gold behind boulders gold behind glass gold behind the names behind gold icon behind gold's rally gold beneath world trade center gold beneath the waves gold beneath dark waters gold beneath the waves pdf gold beneath the waves book gold beneath the southern skies gold chain beneath your shirt gold key beneath the planet of the apes gold bedside table gold bedside lamp gold bedside lamp with usb port gold bedside clock gold bedside sconces gold bedside wall lamps gold bedside table set of 2 gold bedside tables with drawers gold between teeth gold between gap teeth gold between tiles between gold and diamond which is more expensive between gold and platinum which one is expensive between gold and silver which one is expensive between gold and diamond which is more valuable transfer gold between servers wow gold beyond las vegas gold beyond measure gold beyond the sun necklace gold & beyond gold & beyond montgomery alabama gold beyond marlboro gold & beyond on norman bridge road gold & beyond pawn shop gold but a is silent gold but bold gold but old gold but not old gold but no glitter gold buy gold gold but not glitter meaning gold but k is silent gold by the gram gold by the ounce gold by kiiara gold by britt nicole gold by the inch gold by john stewart gold by the gram price gold by commodity contra gold gold in contra costa county gold sodium thiomalate contraindications slim gold contra indicação gold pro contra gold nutrition zma contra indicações 007 contra gold finger ivomec gold contra indicação gold during inflation gold during stagflation gold during deflation gold during recession gold during hyperinflation gold during great depression gold during market crash gold during 2008 crash gold even gold evening gown gold evening dress gold event center even gold is tested by fire even gold can rust lyrics even gold can rust event gold class except gold gold for cash gold for sale near me gold for cash near me gold for sale online gold for america tour gold for jewelry making gold for childhood cancer gold from itsfunneh gold from electronics gold from india gold from dubai gold from pokemon
Source: dcasler.com