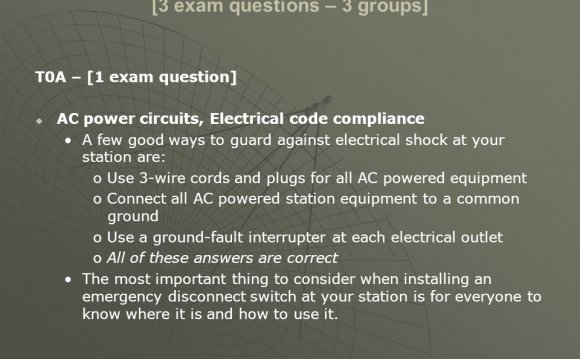 The license exams for all current Amateur Radio licenses: Technician, General and Extra, are all of the same style. Each is four-answer multiple choice. Technician and General have 35 questions; Extra 50.

Here is a typical example:

Which of the following one-way communications may NOT be transmitted in
the amateur service?
A. Telecommand to model craft
B. Broadcasts intended for reception by the general public
C. Brief transmissions to make adjustments to the station
D. Morse code practice

Each question in the pool is preceeded by a header. This is the header for the question above:

T1A07 is the question number. (B) is the correct anwser. [97.3a10, 97.113b] is the section of Federal radio law governing the question. Your exam questions will omit some of this information.

Questions and answers on the exam MUST be taken directly from the question pool you will study in your session. The pool is divided into ten sections called subelements, T1-T0. The number of questions that will be taken from each subelement is given at the beginning, for example, "SUBELEMENT T1 - FCC Rules [5 Exam Questions..." The five questions from this particular subelement and the required number from the other subelements that will be on your exam will be selected at random, however, often by a computer program.

ABSOLUTELY NO CHANGE in the wording of questions or the answers is permitted on exams.

Also, questions on the exam will not be in the same order as in the pool, nor will the order of the answers be the same. For example, the first question might be from subelement 8, the second from subelement 3, and so forth, and answer A may be answer C, for example..