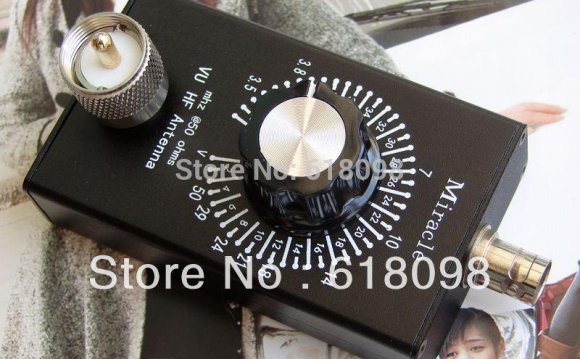 Some of us give up too easily. Or we are too timid to give something new a try. I have seen several examples of this lately. One was a new amateur who got all excited after he upgraded, acquired a perfectly adequate HF station, but then so far has not gotten around to erecting any kind of decent antenna to use with it. I don't know if is because he is intimidated due to lack of knowledge about antennas or if he simply is not sure what type of antenna to put up. Maybe he hesitated, thinking he should wait until he had the perfect choice, or something that would elicit “ooohs” and “aaahs” from stations he worked. Think back a hundred years ago when you first got your ticket. All this stuff was a lot to take in at the beginning.

I also know of a long-time ham who came back from a period of inactivity, dragged the old gear out of the closet, and then, for whatever reason, never quite got around to the most important part of the station—the antenna! He threw some wire out the window but could hardly hear anything, and his radio just hissed at him when he tried to tune up that mess.

I confess I am a procrastinator. I tend to spend a long time getting ready to start to begin to commence to think about launching a project until I inevitably forget what it was I wanted to do. And, by the way, what did I buy those parts and rope and wire and fiberglass and aluminum for in the first place?

But this is different. People who may be otherwise enthusiastic about starting or resuming the hobby are allowing fear or hesitancy to keep them on the sidelines. I'm afraid that some of us who attempt to Elmer them sometimes contribute to the problem by pushing antenna ideas that are beyond their means, knowledge or geography. Or even sometimes beyond their interest level or desire for learning. Not everyone wants to be an RF engineer. They just want to work some DX or conjure up a ragchew. There is nothing wrong with that!

In that spirit, I'd like to list below what I would recommend as the five best get-on-the-air-quickly-and-easily antenna ideas. Maybe you have other suggestions, but understand that I am applying the following logic in picking these particular ones:

It is about as basic as it gets and it can work quite well on any HF band. It consists of two pieces of conductive wire stretched end-to-end, and joined together in the middle with a short insulator. We call that the feed point. Insulators and lengths of rope are attached to each of the opposite ends to support the antenna. Some call this a “flat top” antenna or a “doublet.”

It can be hung between two supports—often trees—parallel to the ground. It can also be supported in the middle with the ends sloping downward in an inverted “vee” configuration. For some reason, this is often called an “inverted vee” antenna. If you remember geometry, it might be obvious to you that the inverted vee takes less space than the flat top.

This antenna can be fed with coax, such as the popular and relatively inexpensive RG-8X, which is easy to run from the middle of the dipole to your shack. The center conductor of the coax is soldered or clamped to one leg of the dipole and the shield is attached to the other. There are several commercially available center insulators that allow you to simply screw your coax onto the insulator.

Copper wire is usually used for a number of reasons. The gauge of the wire is not that important so long as it is big enough to adequately support the antenna but not so big that it becomes too heavy and droops. The support ropes should be weather and UV resistant unless you enjoy reattaching them often and tossing them back over the limb.

As with most antennas, the higher in the air you can get a dipole, the better, if you want to work distant stations. You will make contacts, though, if it is just above head high, and in some cases it actually works better over closer range than if it was in the clouds.