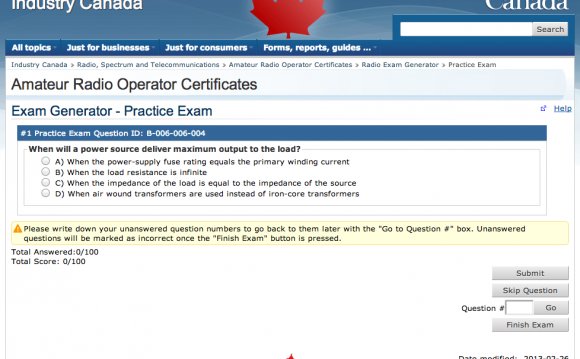 First, regulations and requirements change over time, so make sure you have up to date information before you start. This text started with an email in 1997. The most recent update was in January 2008.

In Canada, ham radio licensing consists of a certificate with various qualifications. Associated with this certificate is the callsign, which is roughly the equivalent of a licence plate, ones "name" on the air.

To get an Amateur Radio Operator Certificate a candidate must pass one or more examinations. These examinations cover various aspects of radio theory, regulations, safety procedures, and for one qualification, the sending and receiving of Morse code. There are three examinations, one for each of the "Qualifications" that may be received. They are the BASIC, ADVANCED and the 5 words per minute Morse code exam. One has to pass the BASIC exam and may then take either or both of the other two.

Passing the BASIC qualification with a minimum mark of 70% allows use of amateur frequencies and modes over 30MHz, 250W max power, using commercial transmitters/amplifiers only. If a mark of 80% or more is achieved, the additional frequencies below 30MHz may also be used. The test is 100 questions, multiple choice, with no penalty for guessing.

There is also a 5 WPM Morse test available. It allows candidates who pass the BASIC with a mark under 80% access to amateur frequencies below 30 MHz. Equipment permitted depends on the other qualifications held. It may also be helpful if you are planning to get permission to operate from other countries (called reciprocal operating privileges). Passing this test requires both sending and receiving Morse code by for three minutes, with fewer than 5 errors in each.

After passing the BASIC exam, one may take either the ADVANCED, or Morse exam depending on what one wants to do. Many people are content with the privileges granted with just the BASIC, and stop there. Some do all three exams. There's no down side to trying.

A quick sidebar about the difference between frequencies above and below 30MHz is in order here. Those below 30MHz are the "short wave" bands, which are the parts of the spectrum that people traditionally associate with ham radio and long distance communications via the ionosphere. Frequencies above 30 MHz are used mostly, but not exclusively for local communications. That said, they are also used for long distance communications via amateur satellites, and radio to internet links.

Which examinations one tries depends on what they want to do in amateur radio. One can prepare for the examination(s) by taking a course, or by studying alone. In Ottawa, for example, there is usually a course offered each fall by The Ottawa Valley Mobile Radio Club (

It runs one evening a week from about mid October for about 28 weeks and costs about $200. A course is a good idea if you are starting out with no background in electronics or radio. It also helps to fill in the gap between the knowledge required to get a certificate, and the practical, real world knowledge needed to become a confident, competent radio amateur. If you have some background, or are used to learning, i.e. still in school of some kind, it is feasible to learn the information needed by using one of the study guides published for that purpose.