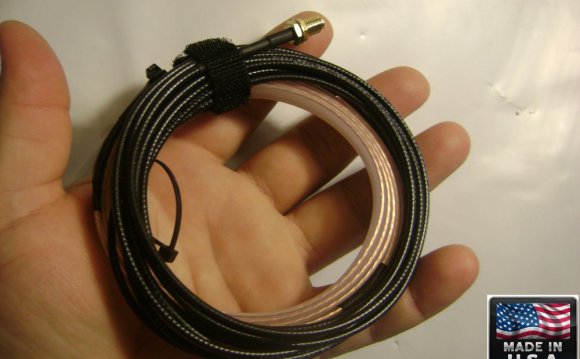 At high frequencies, ham radio antennas can be fairly large. An effective antenna is usually at least ¼ wavelength in some dimension. On 40 meters, for example, a¼-wavelength vertical antenna is a metal tube or wire 33 feet high. At the higher HF frequencies, antenna sizes drop to 8–16 feet but are still larger than even a big TV antenna.

Your physical circumstances have a great effect on what antenna you can put up. Rest assured that a large variety of designs can get you on the air.

Verticals and beams are two of the three basic HF antennas used by hams all over the world. You can build these antennas with common tools or purchase them from the many ham radio equipment vendors.

Vertical antennas are nearly as popular as wire antennas. The ¼-wavelength and ½ -wavelength antennas are two common designs. Verticals don’t require tall supports, keep a low visual profile, and are easy to move or carry. Verticals radiate fairly equally in all horizontal directions, so they’re considered to be omnidirectional antennas.

The ¼-wavelength design is a lot like a ½-wavelength dipole cut in half and turned on end. The missing part of the dipole is supplied by an electrical mirror of sorts, called a ground screen or ground plane.

A ground screen is made up of a dozen or more wires stretched out radially from the base of the antenna and laid on top of the ground. The feed line connects to the vertical tube (it can also be a wire) and to the radials, which are all connected. The ¼-wavelength verticals are fairly easy to construct and, like dipoles, work on odd multiples of their lowest design frequency.

Ground-independent verticals are about twice as long as their ¼-wavelength counterparts but don’t require a ground screen. The lack of a ground screen means that you can mount them on masts or structures above the ground. The feed line is connected to the end of the vertical but requires a special impedance matching circuit to work with low-impedance coaxial feed lines.

Several commercial manufacturers offer ground-independent verticals, and many hams with limited space or opportunities for traditional antennas make good use of them.

Both types of verticals can work on several bands through the use of the similar techniques used in wire antennas. Commercial multiple-band verticals work on up to nine of the HF bands.

The most common HF Yagi today is a three-element design (a reflector, a driven element, and a director) that works on three popular ham bands (20, 15, and 10 meters) and so is called a tri-bander. Below is a three-element Yagi beam on a 55-foot mast whose lowest operating frequency is 14 MHz.

Other HF beams are made from square or triangular loops. They work on the same principle as the Yagi, but with loops of wire instead of straight elements made from rod or tubing. Square-loop beams are called and the triangles are called delta loops. Log periodics are also used on the HF bands, with popular models available that cover 20 through 10 meters.

Whereas wire antennas have a fixed orientation and verticals radiate equally in all horizontal directions, a beam antenna can be rotated, which allows you to concentrate your signal or reject an interfering signal in a certain direction.

You can place small HF beams on inexpensive masts or rooftop tripods, although they overload most structures designed for TV antennas. You also need a rotator that mounts on the fixed support and turns the beam. You can control the rotator from inside the shack with a meter to indicate direction.

Most hams start on HF with a wire or vertical antenna. After you operate for a while, the signals you hear on the air give you a good idea of what antennas are effective. After you have some on-the-air experience, you can decide whether you need a beam antenna.