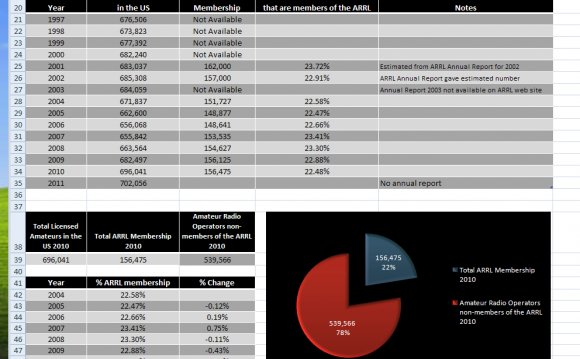 The Amateur Radio population in the US has continued to show steady growth. As of the end of 2013, the FCC database showed 717, 201 licenses in its Universal Licensing System (ULS). That’s the greatest number of US hams ever and up from 709, 575 in December 2012. The volume of Amateur Radio applications slowed somewhat to 141, 943 from its zenith of 176, 826 in 2007, the year the FCC dropped the Morse code requirement.

“The three current license classes also peaked at the end of 2013, ” notes ARRL VEC Manager Maria Somma, AB1FM. “FCC-issued club station licenses are also at an all-time high in the FCC database at 11, 363. The number of new licensees has increased by 7 percent over last year (28, 886 in 2013 and 27, 082 in 2012).” Somma said that a significant number of Technician licensees were earned through large emergency communication and Community Emergency Response Team (CERT) classes.

The breakdown by license class shows Technicians as the largest group, at 349, 163 licensees, followed by General licensees at 167, 257, Amateur Extra licensees at 133, 391, and Advanced licensees at 54, 293. There are still slightly more than 13, 000 Novice licensees on record too. The FCC no longer issues the Novice or Advanced class license. Technician numbers have grown by 8.2 percent over the past decade, with an impressive comeback since 2007 after the population had plummeted from a peak of 338, 334 in March 2000. The General class population has risen by slightly more than 18 percent over the past 10 years. But the Amateur Extra class has shown the most remarkable growth over the past decade, climbing by slightly more than 27 percent, with no dramatic spike after the Morse requirement went away.

While Amateur Radio application volume slipped somewhat overall, that was not the case at the ARRL VEC. “ARRL VEC served 34, 896 exam applicants in 2013, up slightly from 32, 866 in 2012, ” Somma said. “July will mark 30 years that ARRL VEC has been certified by the FCC to administer Amateur Radio exams. We’re delighted to celebrate our important milestone in the same year as the ARRL’s Centennial celebration and look forward to the promise of another record year.”